In recent years, the number of touch phones has increased in geometric multiples, and users can directly interact with the phone system with their fingers. There are basically two ways of touch screen touch: stylus touch and finger touch.

Stylus touch is to use a special touch pen to click on the graphical target on the interface to complete the interaction. This interaction method requires the user to fix the mobile phone device with one hand and the touch pen to touch the touch screen with the other hand. The interaction process requires two hands to participate To complete. Since mobile phone users are often in a mobile state, it is difficult to meet the above operation requirements, and the control efficiency is low. Finger touch can use one hand to hold the hand-held machine, and use the thumb to click or slide to complete the touch control, which is the mainstream of the development of touch screens today.

1 Composition and principle of touch screen

The resistive touch screen is a four-layer transparent composite film screen. At the bottom is a base layer made of glass or plexiglass. At the top is a plastic layer with a hardened outer surface that is smooth and scratch-resistant. In the middle are two conductive metal layers ITO ( Indium TIn Oxide, indium tin oxide, a transparent conductive material), respectively in the base layer and the plastic layer, there are many small transparent isolation points between the two conductive layers to separate them. The structure of the resistive touch screen is shown in Figure 1. 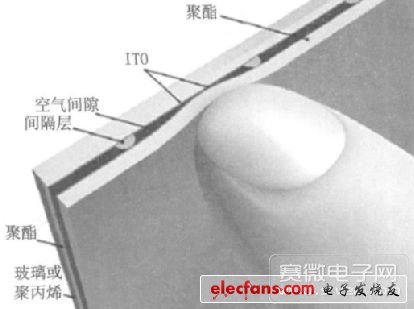 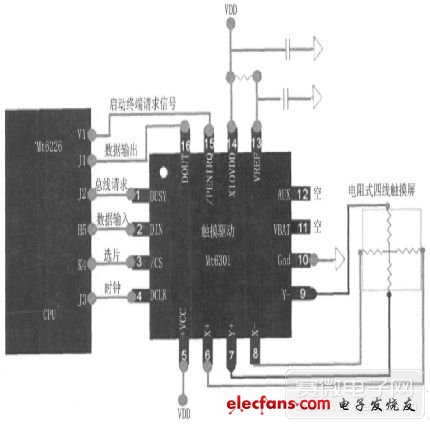 Resistive touch screen is a large-volume application and low-cost technology. Its disadvantages are: thick stack, relatively complicated; poor optical performance, requiring high-power backlight; can not detect the action of multiple fingers; must be under pressure to act; need User calibration.

There are two main types of projected capacitive touch technology: one is self-capacitance and the other is mutual capacitance. 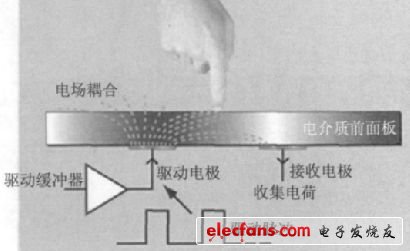 According to the two-dimensional capacitance change data of the touch screen, the intersection with the strongest row and column sensor signals is the touch point. As shown in Figure 4, the numerical approximation by interpolation can determine the coordinate value of the finger position very accurately. The purpose of designing a projected capacitive sensor array is to enable fingers to interact with more than one X sensor and more than one Y sensor at the same time, and combine with other technologies to achieve multi-touch. 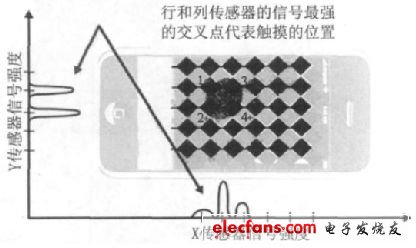 When several touch buttons are close to each other, the approaching finger will cause the capacitance of multiple buttons to change. Atmel's patented Adjacent Key Suppression (AKS) technology uses an iterative method to repeatedly measure the change in capacitance on each key, and compare the results to determine which key is the user's desire. AKS suppresses or ignores signals from all other keys and provides signals of selected keys, which prevents false touches of adjacent keys.

The advantages of the projected capacitive touch screen compared to other touch screen technologies are: high signal-to-noise ratio; the clarity and brightness of the touch screen surface is higher than that of the resistive screen; it can support multi-touch; no user calibration is required. One of its shortcomings is that there is no response when wearing gloves or touching with an insulator. In addition, there is a drift phenomenon, which will be insensitive when the temperature or humidity is high, and will malfunction when the human body or the other hand is close.

This little SMD LED are largely used for kinds of electronic product, for example: LED indicator, LED back light or some DIY led project. These small SMD RGB LED might not easy for weld by our hand because the small size. However, because of this small size, this RGB SMD LED are easier fit with kinds of small size PCB board.

If you really need some small size RGB LED for your project. They won't let you down! Contact us for this SMD RGB LED!