In the future 4G battlefield, China TD will play the leading role?

The latest analysis report released by Goldman Sachs at the end of June shows that global operators are accelerating the adoption of TD-LTE technology. In Asia, TD-LTE will cover 2.7 billion people in China, India and Japan by 2013. The huge potential of these markets will further attract More R & D investment enters the TD-LTE field. "TD-LTE technology is becoming a global solution for asymmetric spectrum."

Up to now, the long-term evolution technology TD-LTE of the third generation mobile communication (3G) international standard TD-SCDMA, which is led by China, has been recognized and accepted by many international operators. It is expected to build experimental networks in 29 countries around the world. More than 10 countries and regions will begin commercial deployment of TD-LTE networks in this year. China has launched TD-LTE scale technology trials in six cities, including Shanghai, and started construction of demonstration networks in Beijing. TD-LTE's enhanced TD-LTE-Advanced has also been identified as one of the three major 4G international standards by the International Telecommunication Union (ITU) last year.

In the future 4G battlefield of the international communications industry, what exactly is the competitiveness of TD? Will it be able to occupy the world afterwards? Will 4G bring China the world's second largest economy once again to lead the world?

China is the dominant player in the promotion of TD

TD-SCDMA is the first international standard with independent intellectual property rights in the history of China's century of communications. In December 2007, the a€?New Generation Broadband Wireless Mobile Communication Networka€? project was included in the National Science and Technology Major Project, which became the top priority of the a€?Eleventh Five-Year Plana€?.

According to the latest statistics released by the Ministry of Industry and Information Technology, as of the end of May 2011, China Mobile a€?s TD base stations reached 214,000, and the network has covered 4 municipalities directly under the Central Government, 283 prefecture-level cities, 370 county-level cities, and 1,607 county hotspot areas And some developed towns. At the same time, TD users reached 32 million, accounting for 43% of 3G users.

In the new building of the Telecom Research Institute of the Ministry of Industry and Information Technology, there are two floors dedicated to TD-LTE testing. In addition to the concentration of relevant Chinese manufacturers there are also equipment from multinational companies such as Motorola, Ericsson and Nokia Siemens.

"China is a leader in the promotion of TD-LTE. We hope to do our job well and at the same time promote the industrialization of standards globally. Therefore, China's TD-LTE test is completely open." Deputy of the Institute of Telecommunication Research, Ministry of Industry and Information Technology Dean Cao Shumin said. During the Mobile World Congress in Barcelona in February 2011, China Mobile, together with Vodafone, Softbank, Batti Telecom and other mainstream operators with important influence, initiated the establishment of the GTI (Global TD-LTE IniTIaTIve) organization, which is intended to promote TD- LTE has become the global mainstream broadband mobile communication standard and has achieved multi-party international cooperation, accelerating the large-scale commercial use of TD-LTE.

Wu Hequan, vice president of the Chinese Academy of Engineering, believes that overall, TD's increasingly perfect industrial chain and fast-developing network construction have laid a solid foundation for the long-term evolution of TD technology, and the prospect of TD technology development is very clear.

TD has many challenges, China is determined

ZTE Senior Vice President Zhao Xianming said that currently the system-side manufacturers represented by ZTE already have multi-module network capabilities, but the strength of the TD / TD-LTE industry chain in terminal chips and business applications is still relatively weak. -There is a bottleneck in the multi-mode work support capability of the LTE terminal chip, and the business application mode needs to be further developed.

At present, the domestic division of TD-LTE spectrum is still unclear. TDD spectrum resources are relatively scarce internationally, and the lack of high-quality spectrum resources in low frequency bands poses greater risks and disadvantages for the future deployment of TD-LTE globally.

In August 2006, China Mobile surpassed Vodafone UK as the world a€?s largest telecom operator. Since then, it has ranked first in the global telecom operator a€?s market capitalization for five consecutive years; in 2006, it entered the fourth place in the world a€?s strongest brand list, and continued for 6 Year ranks among the top of global brands. However, on April 26, 2011, China Mobile a€?s market value was US $ 181.44 billion, which was exceeded by US AT & T with a market value of US $ 182.89 billion on that day, losing its position as the world a€?s largest telecommunications operator for 5 years.

In fact, in the past five years of being the "big boss", China Mobile has continued to maintain good operating performance. In the past two years, its operating income and profits have maintained growth, and scale indicators, efficiency indicators, and growth indicators have all performed well.

Obviously, the capital market has a lot of concerns about TD, and believes that the insufficient technical performance of TD-SCDMA will lead to the loss of high-end users, and the operating loss will increase, and there is great concern about the prospect of an enterprise of China Mobile pulling an industry.

"China Mobile's achievements in advancing the development of TD-SCDMA have been ignored by the capital market." Chen Jinqiao, Secretary General of the Telecommunication Economic Expert Committee of the Ministry of Industry and Information Technology, said, "The market value itself is not important, and China Mobile must concentrate on doing its own thing."

"TD has its own unique advantages, and we are very confident. This rising star does not have his own advantages. Why should we surpass others?" Zhou Zixue, chief economist of the Ministry of Industry and Information Technology, said that the TD road needs to be taken step by step. Gradually approaching the forefront of the world.

With the advent of 4G, TD will not let it go?

Huang Xiaoqing, president of China Mobile Research Institute, said that from a technical perspective, the advantages of TD technology in the voice era are not obvious, but in the data era, its advantage of saving spectrum usage will be fully reflected. "Traditional mobile communications require two symmetrical frequencies to transmit information, but TD technology can use asymmetric frequencies, and use scattered frequencies in a glitch, which greatly improves the efficiency of frequency usage. At the same time, TD technology can also flexibly configure uplink and downlink transmission channels. Compared with this point, it is very consistent with the characteristics of asymmetric upstream and downstream traffic on the mobile Internet. "

According to Cao Shumin, among the three major 4G international standards, due to the weak industrial chain and unclear development prospects of the US-led WiMAX, the European-led LTE FDD is the most powerful TD-LTE competitive technology. TD-LTE and LTE FDD use the same standard system based on LTE. The common platform design of the two can share R & D resources and achievements. The common chip terminal is convenient for global roaming and thus the global user scale. The prospect of TD-LTE and FDD-LTE integration and complementary development has been actively responded by the global industry. At present, a complete industrial chain led by Chinese companies and widely participated by global mainstream companies has been formed.

Qualcomm, a leading global communications technology and semiconductor company, recently stated that all of its LTE products will support both TD-LTE and FDD-LTE. On June 1, Qualcomm announced the launch of the world's first multimode 3G / LTE mobile processor MSM8960, which will be sampled in mid-2011.

According to the Goldman Sachs report, compared with TD-SCDMA, TD-LTE has gained wide support from the world's leading technology companies and should have a smoother road. "We believe that if TD-LTE can be commercialized through high-quality terminals in 2013, this technology should have sufficient development momentum and be supported by operators and technology companies to become a more successful technology than TD-SCDMA. . "

"The TD-LTE ecosystem can only be established if everyone comes to use it. If the 3G stage TD is mainly to build some test networks abroad, there will be a large number of operating companies using TD-LTE in the 4G world." Zhou said confidently.

Wu Hequan believes that the current global 3G network market structure has been set, and the focus of network development has begun to transition to the next generation. TD-LTE is the next-generation mobile communication technology standard. The "China Speed" and "Chinese Innovation" created by its rapid development have received widespread attention and recognition from the global industry, bringing China the first time to lead the world and achieve A rare historic opportunity for a big country to become a communications power.

Bluetooth Sleep Headphone includes new design and development products, specially designed for those who suffer from insomnia in the evening. Especially suitable for people with light sleep. It has Light weight, comfortable fabric, woven wire ultra-thin speaker, customizable logo, velcro adjustment belt freely adjust comfort and sound quality. When you wear it, you won't feel the presence of the speaker, especially on the pillow.

2. Bluetooth can avoid the annoying wires, and freely sleep in various ways.

3. Can be recycled for a long time, washable. 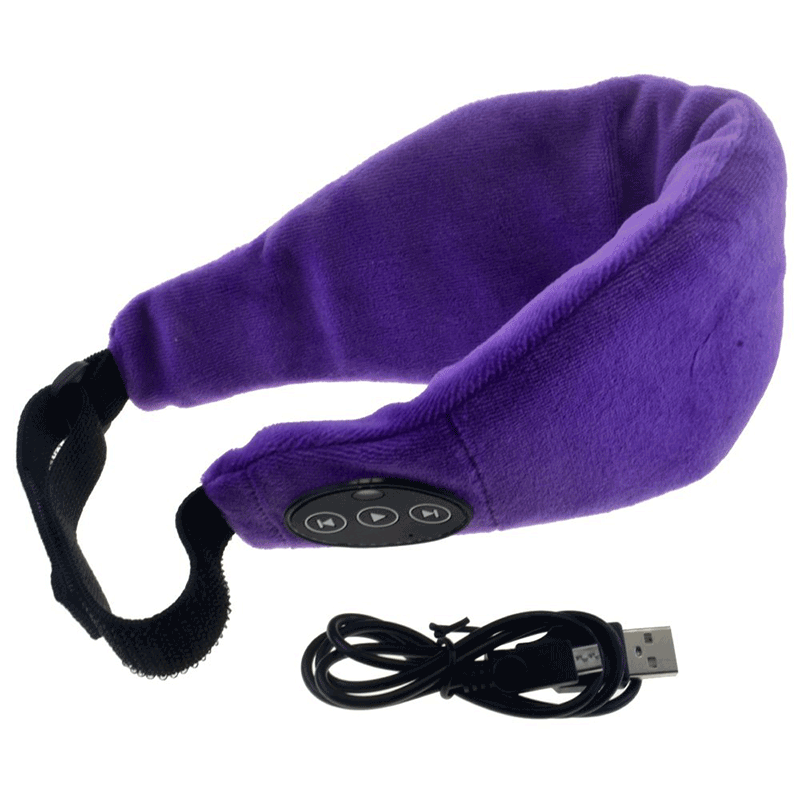